In 2016, Words of Hope Uganda established a new ministry in the Kup-Sabiny language, broadcasting holistic messages to the Sabiny people in the mountainous region of eastern Uganda.

“Our program is just a baby,” says Rev. Paul Masaba, bishop of the Sebei Diocese. “But already indicators are so good! Very many people listen to the Word of the Lord now.”

Accurate information doesn’t always reach these rural areas easily, and many people have held onto the same cultural practices for generations. “People who do not know Jesus may think that if you become saved, you may not do other things. You may not go to school, you may not farm, you just stick to the gospel,” says producer Keren Chalengat. “We let people know that even with Christianity, you are supposed to develop socially, economically, and educationally.” Because more and more people in these remote villages have radios, Keren sees the programs as a great way to teach listeners about Christianity, but also about business, health, and family issues. 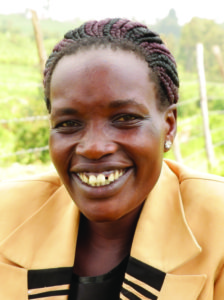 One young listener (featured above with her family) explained: “They teach us about the effects of early marriage, and the importance of taking our children to school. They teach us about building the family relationship. Because when you have peaceful family, you have a peaceful community.”

Keren frequently focuses on women and family issues in her programs, because one of the biggest concerns in these villages is female genital mutilation (FGM). On her programs, Keren often brings in experts from the church who are gifted teachers. Rev. Masaba says that “FGM is a very critical problem for us here. It is inhuman, it is unspiritual. The good news is, the church has come in and we are all involved in fighting the elimination of FGM in our country.”

But change comes slowly in Sebei. “For those who have a low level of education, they believe that FGM is the only thing that can be done to promote them within the village,” says Keren, who has lived her whole life in this region. “They hear from the elders that practicing FGM is okay, and that once you are circumcised, you are no longer a child. You are mature. You are respected. You are free to have a granary (a shed for storing grain) and get married.”

The Sabiny program doesn’t yet have an office or a recording studio, so Keren voices the programs wherever she can with only a hand-held recorder. But Keren loves and believes in the work she’s doing. “I knew it was going to be a good program. I knew it would help me to develop spiritually. Now, the programs are so good and I have been interacting with so many people. It is very important that we continue to make these messages.”