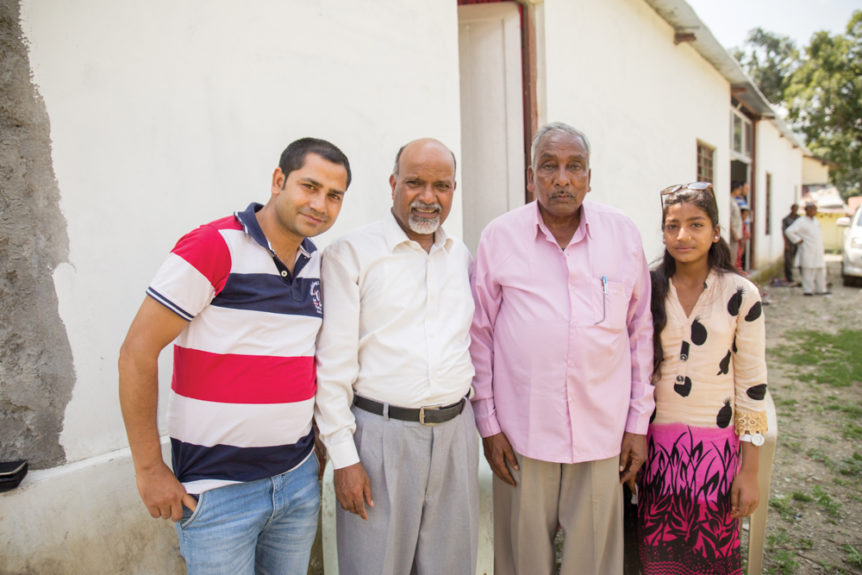 We have traveled many hours into the mountains of India to reach the little village of Srinagar and attend a local church service being held there. The sun is abrasive for this time of year, and the predicted rains have not yet come. But already the open-air church is filling with congregants.

We have come to listen to the stories of the people who have gathered here and to join them in worship, though we will require an interpreter for our interactions. In this little church, the Holy Spirit is doing something big. When Words of Hope’s Garhwali program producer, Rajesh Mansell, started pastoring the congregation some years ago, only a few people showed up at first. Now, we are greeted by a large pile of sandals outside the door, and standing room only past the entrance.

Our interpreter tells us that people from high and low castes are coming together to worship in this place, and this is no small thing. Traditionally, Indian society has been divided into five major castes, or levels, with those at the top receiving the most wealth and power, and those at the bottom being labeled “dalits,” or untouchables.

The grip of the caste system, rooted in Hinduism, has weakened substantially in southern India and in larger cities, thanks to government interventions. But in remote northern villages like this one, casteism still holds sway.

Many Indians believe that they cannot marry someone outside of their own caste, and high caste individuals are known to treat lower classes with contempt, denying them employment or even forbidding them from entering certain establishments.

Much to Lose, Much to Gain

Children skip up and down the aisle and dart in and out of the doors as the adults settle in for the service. As Pastor Rajesh preaches, the translator recounts the sermon for us, offering extra bits of explanation along the way. When the worship team gets up to lead the singing, she points to the young man who is seated behind the drums.

She explains that his family is very wealthy, but that they have disowned him since he became a Christian. Though he was originally born into a high caste, the man’s family now considers him an untouchable because of his faith.

It seems that here, as in many places perhaps, it is the lower members of society who naturally flock to the church’s welcome. In this congregation, such individuals feel wanted, appreciated, valued. Here they are not turned away at the door. High caste members face a harder choice. They have much to lose by deciding to follow Christ, but in this community of faith, they also have much to gain.

After the service we have time to meet some of the congregants and hear their stories. We are interested to meet them, and to hear if the local Words of Hope Garhwali radio programs have had an impact on their lives.

We want to record our conversations on camera, but have forgotten the tripod back at the hotel. The back of a plastic chair serves as our makeshift camera stand, and we settle in to talk with an elderly man and his granddaughter who say they are attending this church for the first time.

As small pigs hurry past us and the midday sun blazes down, we direct questions to elderly Mr. Kallie through our translator, and she summarizes his story back to us.

He explains that four years ago he began listening to the Garhwali radio programs while he was at work. He heard many interesting things on these programs. Over the months he heard testimonies to God’s healing power, stories about other Indian citizens becoming Christians, and teachings about the great goodness of the one true God. Because of what he heard, he tells us, his faith in Jesus began to grow. “I followed the Lord,” says Mr. Kallie, “and never stopped listening to the radio programs.”

A Place to Belong

Pastor Rajesh is an outgoing man whose words tumble over themselves sometimes when he gets excited. We learn that he provides his personal phone number at the end of each radio program that he records, inviting listeners to call him at any time of the day or night to ask for prayers. In the few hours we spend with him, his phone rings often, bouncing out a jaunty rendition of “Jingle Bells” each time another person calls to ask for help.

It is because of Pastor Rajesh’s radio program and follow-up visit that Mr. Kallie has finally ventured to set foot in a church today. He has traveled to the church he knows is pastored by the radio programmer he has listened to for so long.

We ask Mr. Kallie if he has faced opposition from people because of his interest in following Christ. “Yes,” he replies. “Our community has deserted us completely. But I praise God that all of my family members are now faithful followers of Jesus. Some of them have been baptized, and now I am ready to be baptized as well.”

We ask him what he has come to think about casteism based on the Christian teachings he hears on the radio and in this church congregation. “Jesus came for everyone!” he urges. “He died for everyone, and his love is for everyone. He is the only Lord who has been raised to life after death, and he is still alive! I believe that in God’s sight, everyone is equal. I don’t believe in any discrimination.”

The Body of Christ

People linger for hours after the service, praying together, sharing drinks and snacks, and enjoying each other’s company. This is family. This gathering of believers is part of the Body of Christ. And you are too. Thank you so much for supporting the ministry efforts in India that are allowing Pastor Rajesh to create radio programs that lead seekers like Mr. Kallie into the congregation of faith where they can experience freedom from caste discrimination. Thank you for covering our Indian brothers and sisters in your prayers. And thank you for sharing the good news that we “are all one in Christ Jesus” (Gal. 3:28). Thanks be to God!