Nepal is a small, landlocked country to the north of India. Many things make Nepal a hard place to do ministry: the mountainous terrain (including eight of the highest mountain peaks in the world), poverty, illiteracy, and the country’s historic Hindu religion. 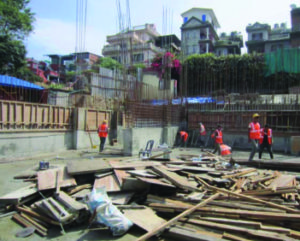 In 2017, Nepal became an even more difficult place for Christians when the government announced that religious conversion would become a criminal activity, weighted with a punishment of up to five years in prison. This anti-conversion law seems to be particularly directed at the country’s small but growing Christian minority.

The number of Christians in Nepal has more than tripled over the last 15 years. There are many reasons for this exponential growth. As tourism to the Himalayas has increased, so too has foreign aid, including a growth in missionary work. This was seen particularly after the terrible earthquakes in 2015.

Nepal’s historic Hindu religion has also created inadvertent opportunities for sharing the gospel. Hinduism is a caste-based religion in which many low-caste people face permanent barriers to a better life. Christianity offers hope in Jesus equally to all people, and churches often help with practical needs.

Words of Hope has partnered with Cross-Way Church in Nepal since 2009. Indigenous churches like Cross-Way are central to sustainable church growth. Although increased persecution can provoke fear, Cross-Way is not stopping its outreach. They are bravely continuing their work of church-planting, media ministry, and indigenous leadership development. As they continue to share the love of Jesus Christ, they rely on the support of Christians like you around the world.

Pray that Christians in Nepal will stand strong as the new anti‐conversion laws will be enforced in August. Pray that there will not be a rise of opposition and persecution against Christians.

Praise God for the completion of two new churches: one in Kanchanpur District and one in Rautahat District. A third church in Sunsari District is in need of a new building as well, as they have over 60 believers worshiping in a room built to hold 30.

Please pray for the construction of the Cross‐Way Ministry Center in Kathmandu (pictured), a necessity after the 2015 earthquakes left the building in unstable and unsafe condition.