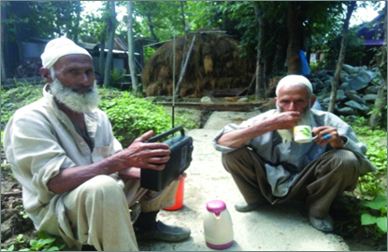 While in many areas, Words of Hope is expanding into new forms of media in order to share the gospel, we often hear stories of ways in which radio continues to reach out to people in special ways as well.

During the month of May, super cyclone Ampha—a powerful and deadly tropical storm—caused widespread damage in Eastern India, especially in West Bengal and Bangladesh.

“I am unable to call any number or receive any call from other numbers,” his message continued. “Sending text messages is the only option for me to communicate. I do not have a smartphone, so I do not have a WhatsApp and Facebook account. The only source for me to listen to the Word of God is radio. This cyclone has caused a great deal of damage in our area. Many people are still staying in the shelter made by the government since their houses have been completely destroyed by the cyclone. In this bad situation everything has been helter-skelter, and I have lost our many belongings.”

Despite the difficulties Aarov and his family are enduring because of the storm, he is thankful for messages of hope on the radio. “I can listen to the peace-giving messages of my Lord Jesus,” he says.

In another region of India, we were contacted by a Dogri program listener named Bimla, who has never had the opportunity to go to school. She cannot read the Bible or books explaining faith since she is illiterate, an experience common for women in India, where over a quarter of the female population cannot read or write.

Radio programs have been a blessing for Bimla as they have helped her to learn about Jesus. “No one told me about Jesus in the way you explain in your program about him,” says Bimla. “It’s simple and easy to understand. Thank you.”

Thank you for supporting the ministry of Words of Hope as together we work to find ways to share the good news of the gospel in the languages and media channels that make the Bible accessible to people like Aarov and Bimla.