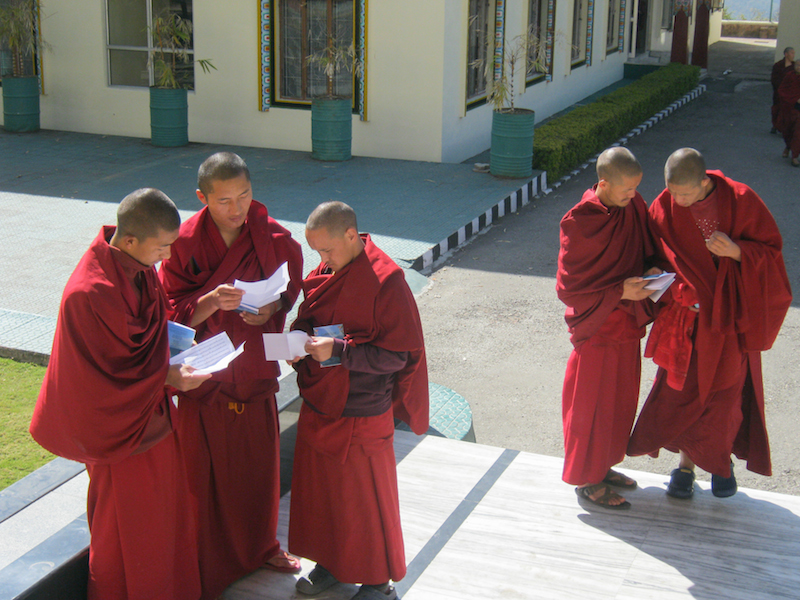 Christians are a Minority

Words of Hope’s Tibetan media team, Gaweylon, faces an incredible obstacle when it comes to sharing the gospel. Tibet and the surrounding areas where Tibetans live are a stronghold of Buddhism. Nearly eighty percent of Tibetans are Buddhist. Less than one percent are Christian.

Being such a minority, Tibetans who are Christians rarely admit their faith, even to family and friends. The Gaweylon media team even struggles to find adequate Christian staffing.

Amazingly though, Words of Hope programming is making inroads into one of the least likely Tibetan venues imaginable: Buddhist Monasteries!

The Gaweylon team has chosen a holistic approach to media evangelism, which seems to be the key to their widespread acceptance.

Recently they received the following letter from a monk: “I did not know many things about health and used to get sick frequently. One day my brother shared with me about health issues, and I was surprised by his knowledge. I asked him who had taught him, and he replied he was learning many health issues as he was regularly listening to the Gaweylon program. I now also listen regularly and follow the suggestions in the program. My health is better.”

Jesus set the precedent for this kind of ministry. Often he healed people physically, fed them, and entered into relationship with them before sharing spiritual truths.

The Gaweylon team does not view such holistic care as merely a means by which they can gain the trust of their listeners. The health programs they produce are primarily a means of service through which they can tangibly express the love of Christ to their community.

Because of this, many community members, Christians and non-Christians alike, are more than happy to help Gaweylon distribute health and gospel pamphlets and CD’s to communities further away. They see that Gaweylon is blessing people, and the people are quick to reciprocate.

The media team had the opportunity to visit a monastery and meet the head Buddhist monk there some months ago. He welcomed the team and told them, “I am aware that Gaweylon is a Christian program. Some years back I and the leaders of the monastery wanted to stop the monks from listening to the program because of the Christian teachings in the program. We later decided against it as the program had other very useful features on health, general knowledge, history and culture, which were good for the monks and increased their knowledge. The Dalai Lama recently visited our area and he told us that our Buddhist religion is good, but that we do not help others as the Christians do. Christians help others—especially the poor and downtrodden whom nobody else is willing to help.”

Words of Hope is thrilled that the programs are being accepted in this way, and trust that the Word of God that is regularly preached will begin to take root. More and more, we are seeing the emerging fruits of this ministry.

We give thanks for the following message that came to us from a Buddhist monk: “I listen to your programs regularly. You tell us to read the Bible everyday and believe in it. The Lord Jesus gave his life and shed his blood on the cross for all of us. If we believe and accept his sacrifice for us, our sins can be forgiven. Why do people in this world have so many religions? Why do they all not become Christians? The Lord Jesus has given a very easy way for salvation.”

Our follow-up team wrote to him to answer some of his questions. He wrote back: “Thank you for answering my many questions. In the evening when the program comes I listen very carefully to the messages. I now understand that I must believe. Jesus is different from all others. He is a kind and merciful God. My eyes are opened to many new truths.”

We believe that when the Word of God is preached, the Holy Spirit can accomplish amazing things. Please join us in praying for our Gaweylon media ministry to Tibetans. Pray that the Christian minority would be encouraged and grow in their faith, and pray that the many Buddhists who listen to the programs would come to a saving faith in Christ Jesus as well.